For this Women's History Month special program, Dorothy Fadiman will present selections from her Emmy Award-winning film trilogy, From the Back Alleys to the Supreme Court and Beyond. This deeply moving documentary presents the stark history of what life was like for American women before abortion was made legal, safe and widely available, all elements now at risk of returning. Dorothy will also present portions of her documentary that record the history of women demanding their rights, resulting in Roe v Wade.

[Speaker to be announced] will discuss the ramifications of the recent Supreme Court case, the wide-ranging and highly organized use of TRAP laws nationally to challenge women.s hard-won rights, and what the future of freedom of choice might look like.

The program will begin with a very brief video tribute to Berta Cáceres, the Honduran environmental and indigenous rights activists who was recently assassinated.

Light refreshments will be served.
The event is FREE to the public, but space is limited.

Oscar-nominated and Emmy Award-winning producer Dorothy Fadiman will share clips from her film trilogy "From the Back-Alleys to the Supreme Court and Beyond" and bring to life the history of the struggle for women's reproductive rights in the United States.

Light refreshments will be served.
The event is FREE to the public, but space is limited.
Join PPAM, the National Council of Jewish Women, ACLU, and NOW to learn what the future holds for a women's right to choose in Michigan and what we can do about it.

Dorothy will share clips from her film trilogy From the Back-Alleys to the Supreme Court & Beyond and bring to life the history of the struggle for women's reproductive rights in the United States.
With special guest Michigan Senate Democratic Leader Gretchen Whitmer.
The flyer for the event

Please join Dorothy when she speaks at the 31st Annual Choices Breakfast - held by Six Rivers Planned Parenthood at the Baywood Country Club.
The flyer for the event: http://choiceatrisk.org/eureka-pp-six-rivers-18-19-jan-2013.html

View selections from Dorothy's films on reproductive rights, have the opportunity to ask questions, and hear about her filmmaking journey. The flyer for the event: http://choiceatrisk.org/eureka-pp-six-rivers-18-19-jan-2013.html

See the flyer for the event

See the flyer for the event | FIUVOX Facebook Group | www.fiu.edu

The Unitarian Universalist Association is supporting Dorothy’s nationwide tour presenting excerpts from her PBS special “From the BACK ALLEYS to the SUPREME COURT & BEYOND.” http://www.wmm.com/filmcatalog/pages/c406.shtml Her videos provoke discussion and ignite activism on one of the most divisive issues in the United States today fueled by media reports on religious groups challenging women’s rights. The UUA has repeatedly adopted statements promoting women’s rights, and the 2012 General Assembly selected "Reproductive Justice" as a Congregational Study Action Issue. http://uua.org/reproductive/index.shtml

You are invited to "CHOICE at RISK: A Screening and Community Gathering" with Oscar-nominated, Emmy-winning filmmaker Dorothy Fadiman, and New Voices Pittsburgh: Women of Color for Reproductive Justice, happening on October 5th at 7 pm, at First Unitarian Church of Pittsburgh.

The Unitarian Universalist Association is working with Dorothy to support her nationwide tour presenting excerpts from her PBS special "From the BACK ALLEYS to the SUPREME COURT & BEYOND." These videos, related to abortion rights, catalyze discussion and ignite activism. This screening will include a special showing of We Always Resist: Trust Black Women.

"Abortion" is one of the most divisive issues in the United States today. Media often report on religious groups challenging women’s rights. The Unitarian Universalist Association has made several social justice statements over the decades supporting women's right to choose, and "Reproductive Justice" was voted on as this year's Congregational Study Action Issue.

This event is sponsored by New Voices Pittsburgh: Women of Color for Reproductive Justice, the Unitarian Universalist Community on Campus, Womenspirit, and the Social Action Council of the First Unitarian Church of Pittsburgh.

What do YOU stand to lose this November?

An afternoon of film and discussion to raise awareness and inspire activism.

Dorothy will screen excerpts from her PBS Documentary trilogy From the Back Alleys to the Supreme Court and Beyond AND Stealing America: Vote by Vote. Kate and Dorothy will present issues and concerns surrounding voting access and women's reproductive justice. Q&A will follow the presentations and screening.

See the flyer for the event

The Unitarian Society of Germantown

From the BACK ALLEYS to the SUPREME COURT & BEYOND

Please join representatives of the USG Reproductive Justice Initiative for an engaging evening as we host filmmaker, Dorothy Fadiman, on her Choice at Risk Campaign screening tour. The screening will include one or more films from Fadiman's trilogy on abortion rights, and/or selections of mini-docs culled from these films.

One of Choice at Risk's main goals is to present an informed, essential balance to the often volatile conversation surrounding reproductive rights. Topics on which the seven mini-docs focus include the era of back alley abortions; the legal history of contraception and abortion; the impact of restrictions on minorities and youth; and the threats of violence aimed at clinics and providers. The overarching goals are to educate, motivate and activate people to protect women's and men's reproductive rights.

Last spring, Reproductive Justice was selected as one of the top four social justice issues that USG would support this church year. In addition, Delegates of the 2012 General Assembly in Phoenix, AZ, selected "Reproductive Justice: Expanding Our Social Justice Calling" to be the 2012-2016 Congregational Study/Action Issue (CSAI) of the Unitarian Universalist Association (UUA) of Congregations.

It is in keeping with these goals at both USG and at the UUA that we present Dorothy Fadiman and her work on this incredibly important topic.

Join us on Sept. 28 for this wonderful chance to view Dorothy's work and to sit down with her and talk about these important issues. Bring an appetizer or snack to share for fellowship and enjoyment. To RSVP, send a note to admin@usguu.org.

The First Unitarian Church of Philadelphia

Pennsylvanians for Choice and the Unitarian Universalist Association are hosting the CHOICE at RISK Screening Event and Community Gathering. This event celebrates the collegial relationship of pro-choice and faith-based communities as they work together to address escalating restrictions to reproductive rights. Reverend Beverly Dale (PA Clergy for Choice) will co-host the evening with OSCAR-nominated, EMMY-winning filmmaker Dorothy Fadiman. In addition to this screening, this fall the Unitarian Universalist Association will offer a constellation of video content from Fadiman's PBS documentary trilogy From the BACK ALLEYS to the SUPREME COURT & BEYOND. They believe the clips and mini-docs related to abortion rights will catalyze discussion and ignite activism.

Sex, Politicians and Your Birth Control - An energetic luncheon to get fired up for the 2012 election. We will be discussing the latest attacks on women's health, including the assault on birth control, with Oscar-nominated, Emmy-winning producer Dorothy Fadiman. 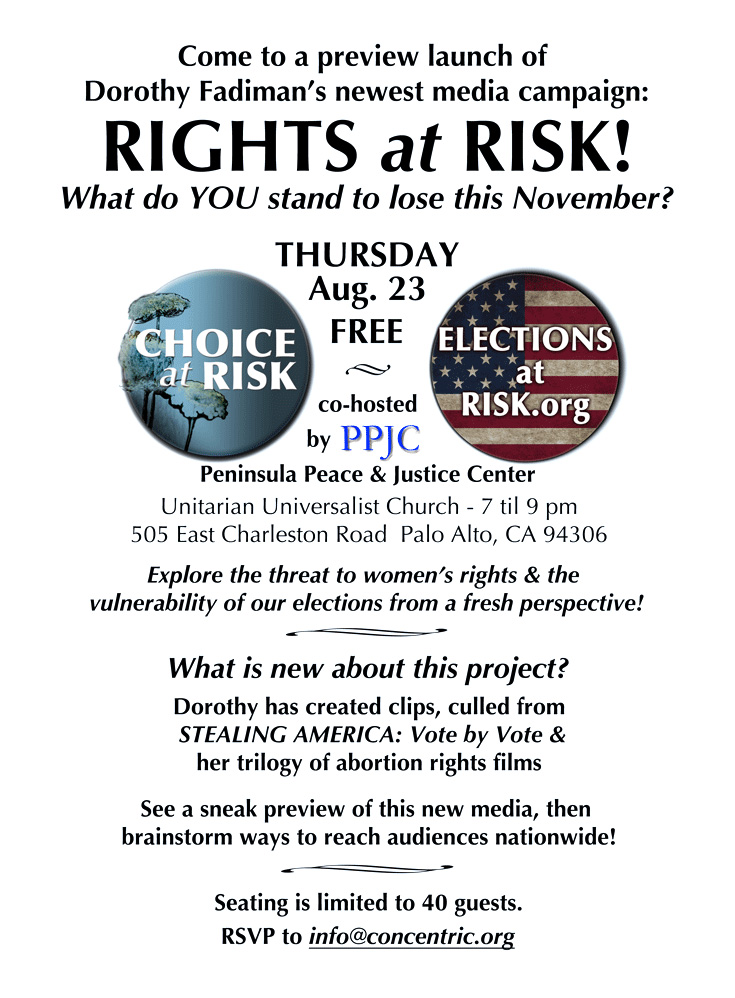 Our goal is to raise awareness about the importance of activating the “pro-choice vote.” Link to show which was aired: https://vimeo.com/44488970

The Association for Women in Psychology (AWP) 37th Annual Conference

Dorothy Fadiman was the Plenary Speaker

"Recommended viewing for physicians, medical students, residents and anyone interested in understanding the controversial issue of abortion."
- Fertility News
"What characterizes these stories and interviews from beginning to end, is compassion. Beautifully made, thoughtfully structured, brilliantly narrated..."
- Film Division, Library of Congress
"These documentaries belong in the lending library of every institution committed to social justice."
- National Women's History Project